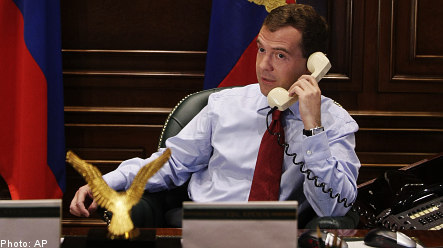 Russian President Dmitry Medvedev does not want the EU-Russia summit to take place in the Swedish capital “and insists that it takes place in Brussels,” which Moscow considers more neutral, a Swedish government official told AFP.

The twice-yearly summits normally alternate between Russia and whatever country is holding the EU presidency. The last such summit was held in May in Khabarovsk, in Russia’s far east. No date has been set for the next one.

Relations between Stockholm and Moscow are strained as Sweden vocally denounces human rights violations in Russia.

Swedish Foreign Minister Carl Bildt was also harshly critical of Russia’s military intervention in Georgia last August in the name of protecting the breakaway Georgian republic of South Ossetia, even making a parallel with

Neither did Moscow appreciate a Swedish-Polish initiative last year for an EU “Eastern Partnership” which would allow Europe to boost its ties with six former Soviet-bloc states: Armenia, Azerbaijan, Belarus, Georgia, Moldova and Ukraine.

The Russians are also waiting for Sweden to approve the North Stream gas-pipe project which would bring Russian natural gas as far as Germany via the Baltic Sea. Stockholm is insisting on environmental guarantees.