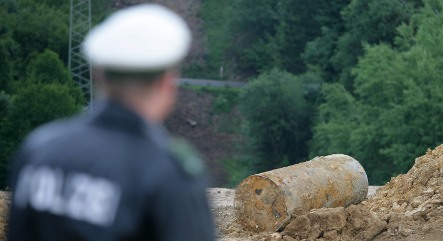 A file photo of a found WWII bomb. Photo: DPA

The British aerial bomb was discovered near the Emmrich-Cambrai barracks during a construction project on Tuesday afternoon.

Officers from the explosive ordnance disposal unit found they were unable to defuse the explosive due to a corroded fuse. They deemed the bomb too dangerous for transport and were forced to detonate it.

Around 8 pm, some 6,000 residents within a 1,000-metre radius of the bomb were evacuated – including a retirement home and two school buildings, the fire department reported.

Bomb experts detonated the bomb at approximately 1 am, after which residents were allowed to return to their homes.

No damage to nearby structures was reported.

Hannover, the capital of the state of Lower Saxony, was extensively bombed by Allied forces during the Second World War.

More than 60 years after the end of World War II, entire neighbourhoods are still often evacuated for weapons recovery in Germany. Allied forces dropped more than 2.7 million tonnes of explosives across Germany during the war. Some of the ordnance did not explode and has become increasingly dangerous with time and corrosion.

In 1994, three construction workers were killed and eight bystanders injured when an unexpected bomb detonated, tearing through nearby buildings and cars in Berlin. In 2006, a road worker was killed near Frankfurt when his excavator hit a bomb.