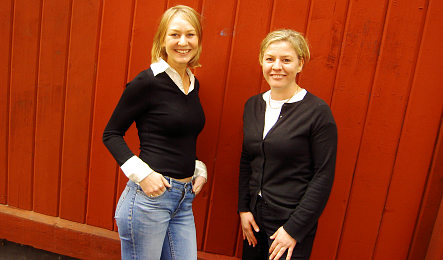 This year, freelance journalists Louise Ribbing and Anna Wramner will be blogging for The Local from Gotland and describing first-hand the event that abolishes political stereotypes. The two are Almedalen experts: this will be Ribbing’s third year attending and the tenth for Wramner, who says the conference has grown exponentially from its relatively humble beginnings.

“It’s been happening since 1968 and it’s grown,” Wramner explains. “Now it’s out of proportion. Everyone is there: political elite, media elite, lobbyists, interest groups and lots of companies. But it’s very informal, it’s probably the only time each year you’ll see the Prime Minister walking the streets in a swimsuit.”

The two have been friends since high school, over 20 years ago, and fit together like peas in a pod: they finish each other’s sentences, laugh at each other’s punch lines before a joke is finished and have both travelled the world. Last year, the two went to Zimbabwe and South Africa together to report on elections. Now their plan is to write a blog for one week about their experiences hobnobbing with Sweden’s political elite at Almedalen.

“I think it’s an interesting event and unique in the world,” Ribbing says. “I think readers will get a good idea of what Almedalen is all about. Our role isn’t covering the news, you can read that on a news site. We want to give an insiders’ view into the conference.”

Wramner says the event has around 2,000 different seminars in one week, all of which are free to attend and are studded with political stars from all parties. But the blog won’t just cover the day-time events – the two will also report on evenings spent mingling and sipping champagne with Amedalen attendees.

“What surprised me the most the first time I went was seeing politicians in opposition to each other being so close and friendly,” Ribbing recalls. “When you see them on television they are arguing, and here they are having a beer together, and that’s quite funny.”

Wramner adds that it is this sense of informality that makes Almedalen so unique to Sweden.

“You can go up to the prime minister and have a chat and tell him, ‘This is what I want,’” Wramner explains. “From a democratic point of view, it’s really interesting. You can’t find anything like it anywhere in world, where you can walk up to anybody and have access to the political elite for one week.”

Anna and Louise begin blogging on Monday June 26th. Stay tuned to The Local’s Blogs section for all the latest from The Almedalen Insider.