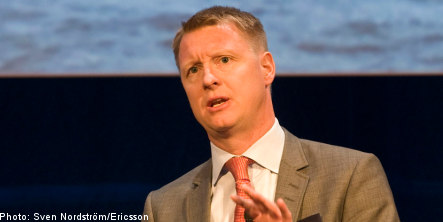 The 44-year-old Vestberg has been with Ericsson since graduating from Uppsala University in 1991. Since then, he’s held a number of international management positions, including serving as the CFO of Ericsson in Brazil between 1998 and 2000, and in North American from 2000 to 2002.

In announcing the news, Ericsson board chairman Michael Treschow praised Vestberg’s career with the company.

“He has a proven excellent understanding of Ericsson’s business with experience from all different Ericsson business activities. He has been instrumental in developing Ericsson’s industry leading services operation which grew threefold with good profitability during his five years of management,” Treschow said in a statement,

Treschow added that Vestberg would take over the helm as Ericsson embarked on a “crucial” phase involving the transformation of telecom operators’ networks and implementation of IP-based services.

Svanberg, who has led Ericsson since 2003, will remain in his position until year-end when he takes on his new assignment as chairman of BP, although he will continue to serve as a member of Ericsson’s Board of Directors.