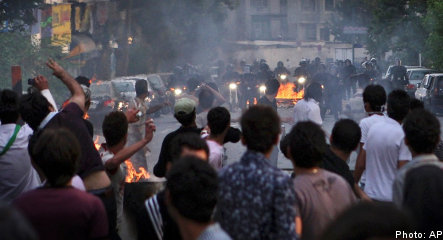 The half-hour meeting was aimed at conveying the Swedish message and not to demand an explanation from the diplomat, she said.

Sweden will take over the rotating presidency of the European Union on July 1 and Belfrage therefore reiterated the EU’s criticism expressed on Monday.

He condemned the violence that has surged since Iran’s June 12 disputed election and the restrictions imposed on foreign journalists, and stressed the need to shed light on the result of the vote, Julin said.

The Iranian opposition has been staging almost daily rallies to protest against alleged fraud and widespread irregularities in the election, which returned hardline President Mahmoud Ahmadinejad to power.

Iranian state media said that at least 17 people have been killed and many more wounded in the unrest that has convulsed the nation for 11 days.

The protests are the biggest popular upheaval in Iran since the 1979 Islamic revolution.