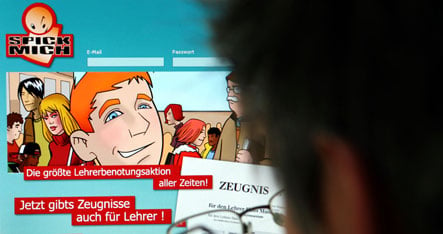 The Federal Supreme Court, Germany’s top civil tribunal, rejected the claim of the teacher, Astrid Czubayko-Reiss, that her right to privacy was violated by the site, spickmich.de (loosely translated as checkmeout.de) where she received a mediocre rating from students.

“The right of students to exchange opinions and communicate freely outweighs the right of the teacher suing to determine information available about her,” the court in the southwestern city of Karlsruhe ruled.

The website allows students to turn the tables on teachers by anonymously grading them in categories including “cool and funny,” “popular,” “motivated,” “relaxed” and “teaches well.”

Czubayko, a German teacher from the western state of North Rhine-Westphalia, had received an overall grade of 4.3, or a “D.” She had also lost her case before lower courts and appealed to the federal tribunal. The German Teachers’ Association criticised the ruling.

“It is inexplicable that the [court] values the personal rights of teachers less than an anonymous assessment of teachers by students on the internet,” said Association president Josef Kraus.

Kraus said his organisation hoped the case would be overturned by the country’s highest tribunal, the Federal Constitutional Court.