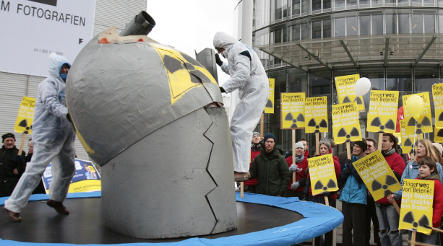 More than ten police and fire vehicles raced to the scene after a neighbour called the authorities having seen the sign on the house.

Experts used Geiger counters to check for radioactivity – there was no-one to explain the mix-up as the boys had wandered off.

“The fire crews responded to the call and brought the police. They closed off the roads and the surrounding area to the public, in order to deal with this supposed threat,” Warendorf police spokeswoman Susanne Dirkorte-Kukuk told The Local.

The boys had spent the afternoon pretending to work in a nuclear power plant and to make it seem more realistic, had printed out a radioactive warning sign they had found on the internet and taped it to the door of their house.

When they went off for a break, they left the sign up, which was spotted by concerned neighbours who called the police.

The fire and police departments in Stormberg, near Mainz in Rhineland-Palatinate took the call seriously and raced to the house.

When the boys wanted to clock back in to their atomic workstation, they found their new workplace was locked down by police.

It was only after the parents read about the warning of a radioactive threat on the internet that they informed police the signs had been posted by the two school friends and the area was given the all-clear.

“At the very least, it was a good drill for the police, and in that respects, it was very successful,” said Dirkorte-Kukuk.