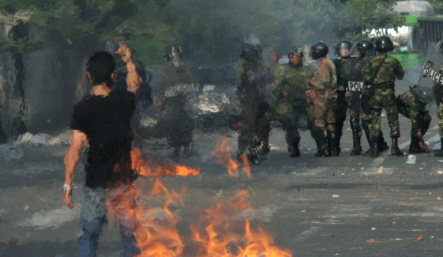 “Germany stands by the people in Iran who want to exercise their right to freedom of expression and freedom of assembly,” Merkel said in a statement.

“I strongly urge the Iranian leadership to permit peaceful demonstrations, renounce the use of violence against demonstrators, release detained members of the opposition, permit free reporting by the media and conduct a recount of the ballots cast in the presidential election.”

Merkel said that Iran, like other nations, must also “fully respect human and civil rights”.

Amid massive street protests and opposition accusations of fraud in this month’s presidential election, Iran’s electoral watchdog has expressed its readiness to “randomly” re-count up to 10 percent of ballot boxes.

The opposition is seeking a re-run of the election.

State television reported that at least 10 people were killed and more than 100 wounded in riots and clashes in Tehran on Saturday between opponents of incumbent President Mahmoud Ahmadinejad and security forces.

World leaders have voiced mounting alarm over the unrest, which has shaken the pillars of the Islamic regime and raised concerns over the future of the oil-rich Shiite Muslim powerhouse.

The Iranian leadership has accused foreign governments of meddling in the country’s affairs.