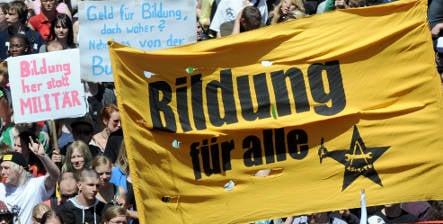 Walking back from lunch today I came face-to-face with Germany’s very own JFK moment.

I’m talking about what the country can do for the tens of thousands of angry and entitled students that are taking to the streets this week to demonstrate against the miserable state of the country’s educational system.

They’re understandably not happy about Germany’s overcrowded and mediocre universities, the threat of tuition fees, and the jarring shift to internationally recognised bachelor’s and master’s degrees in recent years.

So there I was, digesting my artichoke and mustard sandwich on my way back to the office, as a rowdy protest march snaked its way through central Berlin demanding educational justice for Germany’s irked youth. Aside from the leftist squatters getting in on the fun by launching fireworks from a nearby rooftop, one banner in particular caught my eye.

Showing a huge clenched fist it read: “You Gotta Fight for Free Education and Solidarity.”

Unlike a lot of the slogans being held aloft by passionate students at the demonstration, those were sentiments I could wholeheartedly agree with – if in a completely different way from how the protestors meant them.

Click here for photo gallery of the student protests in Berlin.

That’s because the concept of “solidarity” gets tossed around a lot in Germany, sadly making it rather trite. Everyone demands it, but few seem to realise it’s a two-way street.

The students want German society to back tuition-free university education, which is a legitimate, if in my mind, totally self-defeating position once you look at the dismal state of higher-education funding in this country.

There has been an outcry over the decision of some German states to impose modest tuition fees in recent years, with opponents claiming that soon only the rich will be able to go to university. But it’s ridiculous and patronising to assume most German students couldn’t afford to pay back €500 per semester once they’ve graduated.

Now, as someone who had to pay back $60,000 in student loans for a measly two-year master’s programme, I’m the last person to argue Germany needs to move towards US-style tuition fees.

However, every couple of years I like to trot out my plan to save the German higher-education system – while modernising the country’s armed forces in the process.

Germany stubbornly holds on to its outdated military conscription despite the overwhelming evidence that a smaller professional army could better serve its needs than one bloated with reluctant short-term soldiers. Besides, fewer German men bother to head to Bundeswehr boot camp than ever before – preferring instead to do alternative Zivildienst, or civilian service.

While Germany’s compulsory military service may be unfair and dysfunctional at best, many social organisations have come to depend on Zivis, as men avoiding Wehrdienst are called. I’ve known Germans who have worked as medics in ambulances, some who have cared for the severely disabled, and yet others who’ve played ping-pong with teens at youth centres.

But no matter how diverse their public service was, they all believed their Zivildienst stints did as much for them as it did for the community. Certainly, that must be what most Germans mean when they talk of solidarity.

So what exactly do I propose? Well, I’m glad you asked.

If prospective university students want German society’s solidarity for a free education, they should be willing to commit to one year of a new form of Zivildienst.

Decoupled from military conscription, both men and women would be allowed to study tuition-free – all the way to a master’s if they wanted – if they cared for the elderly or worked with troubled schoolchildren as 21st-century Zivis.

This would have the added benefit of widening the pool for Zivildienst at a time when Germany’s population is aging rapidly and state budgets for both education and other public services continue to shrink.

If students preferred to take out loans to pay modest university tuition fees – we’re only talking around €4,000 for a four-year degree here – in order to forgo a year of public service that would be their choice.

At the same time, Germany’s higher-education system, flush with extra cash, would have to become less elitist and more open to a larger proportion of the population. That’s part of what the admittedly flubbed Bologna reforms have attempted but failed to do.

Many German students currently fear they will be unemployable if they stop at a bachelor’s degree. That too has to change.

Not everyone in this status-fascinated country needs a master’s degree or a doctorate. For most, a bachelor’s combined with a year of practically oriented public service would be far better than spending a decade at university engaging in never-ending academic soul-searching.