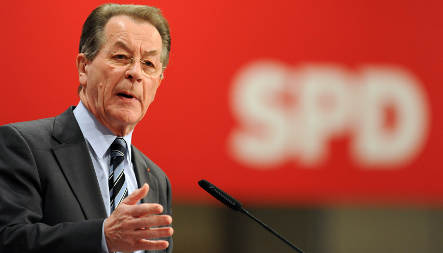 Müntefering’s broadside in the weekly newspaper Die Zeit focused on Merkel’s role in the rescue of troubled automaker Opel. He accused her of supporting the rescue plan, but then praising Economy Minister Karl-Theodor zu Guttenberg, who openly opposed the bailout.

“This double standard is not believable and harms the negotiating ability of the government,” said Müntefering, who is chairman of Merkel’s junior coalition partner the centre-left Social Democrats. “If the chancellor first says it is necessary, and then praises Guttenberg as a great guy, that’s dishonest. You can’t simultaneously be for and against something.”

Despite Müntefering’s tough words, the SPD’s prospects continue to worsen, as a new poll showed Wednesday.

The Social Democrats lost another three points, gaining the support of only 21 percent of voters in the Forsa poll for Stern magazine. The results are the worst for the SPD since former party leader Kurt Beck was toppled in a backroom coup in September 2008.

The results also mirror the party’s disastrous performance in the European parliamentary elections on June 7, when the SPD managed to get only 20.8 percent of the vote, its worst showing ever.

The poll was taken before the party’s convention on Sunday, where chancellor candidate and current Foreign Minister Frank-Walter Steinmeier gave a rousing speech promising to fight hard in the election.

Müntefering said he expects Merkel’s current sky-high popularity to plummet as the September 27 election draws near.

“The chancellor isn’t the ideal campaigner because she’s not a convincing communicator,” Müntefering said.

The SPD chairman said the central theme of the election will be over jobs. He promised active intervention by the state in order to preseve jobs.

But voters don’t seem convinced by the SPD’s message. The Forsa poll showed only 6 percent of those polled thought the party would best handle Germany’s problems while 29 percent thought Merkel conservatives would do a better job.

A left-leaning coalition of the Greens, Left Party and SPD would only pull in 45 percent of the vote, according to the poll.