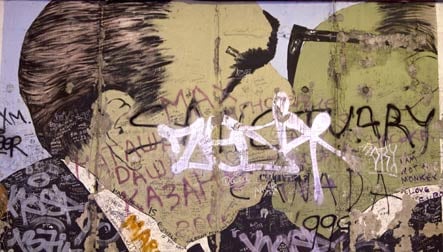 “I am a little bit afraid,” Russian artist Dmitry Vrubel said as he began recreating his mural, one of more than 100 painted after the Wall was torn down in November 1989 on a surviving stretch known as the East Side Gallery.

“Maybe I can’t remember everything, so it won’t be exactly the same painting, not 100 percent the same,” Vrubel told AFP.

The murals were removed in April after decades of Berlin weather, pollution and vandalism by souvenir-hungry tourists left the 1.3-kilometre wall underneath badly in need of restoration.

With the wall now protected with a special undercoat, many of the original artists from around the world are returning to re-do their paintings in time for celebrations marking 20 years since the fall of the Wall on November 9.

Of the 155 kilometres of grey concrete that cut off West Berlin from its hinterland for 28 years and made East Germans prisoners of their own country, only about three kilometres in total is still standing.

What Honecker’s communist East Germany called an “anti-fascist barrier” was chiselled apart by Germans from East and West euphoric over the opening of the border in 1989 and large slabs were sold off to foreign buyers.

Vrubel, who was reported to be angry after reportedly only finding out via press reports that his “Brother Kiss” mural had been erased, said he would need “at least a month of work” to complete the job.