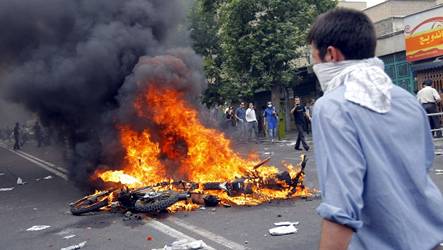 “The violent actions of the security forces against demonstrators is not acceptable, nor is preventing peaceful protest. We will continue to monitor the situation on the ground very carefully,” Steinmeier said in a statement.

“The voting procedures in Iran raise several questions. Reports of irregularities are a concern. I expect the authorities in Tehran to examine these accusations as closely as possible and to provide a comprehensive explanation,” Steinmeier said.

Final results of the poll showed Ahmadinejad winning almost 63 percent of the vote against 34 percent for Mousavi, prompting thousands of angry opposition supporters to take to the streets in protest, triggering violence on a scale not seen in Iran for a decade.

Amid the turmoil, Iranian security forces arrested at least 10 leaders of two reformist groups who backed ex-premier Mousavi in Friday’s vote, an official from one of the factions told AFP.