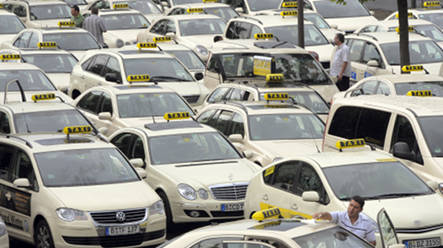 The protest is scheduled to run from 9 am to 10:30 am Monday morning and will strand arriving passengers who hoped to take a taxi into the city. Berlin’s public transit agency says it plans more buses to and from the airport to handle the expected onslaught of passengers.

However, it is not clear what will happen if the taxi drivers succeed in blocking the airport’s entrances and exits. Airport spokesman Ralf Kunkel told the daily Tagesspiegel that the airport plans to prevent a blockade attempt and will be backed up by the poice.

The drivers are upset about the €0.50 fee, which is due to come into effect July 1st. The fee is supposed to pay for airport employees who are used to regulate the flow of taxis in and out of Tegel.

The drivers are also protesting other fare increases that are expected to be approved by Berlin’s Senate on Tuesday. The taxi drivers’ association says the price increases will drive off customers and cause their incomes to drop at a time when business is already weak.

Another group of taxi drivers also plans to protest the fare hike – but doesn’t want to be associated with the Tegel blockade. They plan to picket at the Brandenburg Gate at noon on Monday instead.