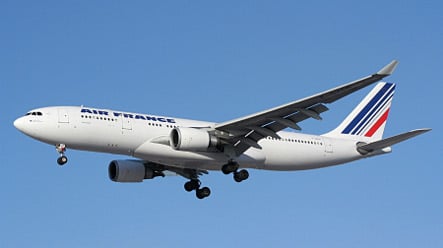 A file picture of the missing plane. Photo: DPA

“Like all people in Germany I am stunned by this tragic crash of the Air France plane over the Atlantic Ocean. It is a human catastrophe,” Merkel said in a statement.

“We are all in mourning for the victims. Our sympathies go out to their families. We are thinking of them and wish them strength at this difficult time.”

At least 26 Germans were among the 228 people believed to have perished on Air France flight 447 from Rio to Paris, according the airline.

Brazilian aircraft searching the Atlantic on Tuesday found debris from a plane, 650 kilometers (400 miles) northeast of Brazil’s Fernando do Noronha island, a spokesman for the air force said. It was not clear yet whether it was from the Air France flight.

German officials have yet to confirm the number of people missing, however, most of the victims of the likely crash were Brazilian and French.

The Airbus A330 jet took off late on Sunday from Rio de Janeiro bound for Paris. It is believed to have crashed somewhere over the Atlantic Ocean after hitting a powerful electrical storm at around 4:00 am German time on Monday.

Air France said that among 216 passengers, there are 126 men, 82 women, seven children and a baby. The crew was made up of 12 members, including nine members of the cabin crew.

The German Foreign Ministry said it was working with its consulate in Rio de Janeiro and a crisis task force in Paris to get “solid information” on the fate of any German citizens.

A spokesperson for the Bavarian Interior Ministry said Tuesday that nine passengers on the plane were scheduled to transfer to Munich, with one of them planning to fly on to Nuremberg. The ministry was not able to say whether these people were German citizens or not.

News reports said that the German victims included a family of five from near Stuttgart, a 44-year-old Berlin man engaged to a Brazilian, a board member of steel giant ThyssenKrupp and a well-known architect.

Der Tagesspiegel reported that Potsdam architect Moritz Kock was likely on board the flight. Friends and family told the paper they had been unable to reach him.