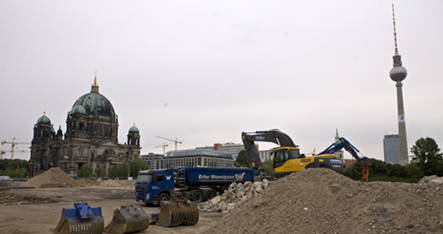 The local and federal governments, along with a private foundation plan to rebuild the former City Palace, seat of the Hohenzollern royal family who ruled Prussia and Germany until 1918, on the site of the former East German Palace of the Republic, which was razed last fall.

“This is another attempt, after the demolition of the Palace of the Republic, to obliterate the architectural heritage of East Germany,” Oswalt told the news service DPA in an interview published Sunday.

Oswalt also spoke out against plans to demolish the Marx-Engels Forum square. The site, which is just across the Spree river from where the Palace of the Republic stood and where a rebuilt City Palace would rise, is currently dominated by a slightly cuddly statue of the two Communist thinkers, along with benches and trees. The new city plan would rebuild the area in the style of Middle Age Berlin.

“This is a Berlin tradition since the Wilhelmine era: To let the legacy of preceding generations disappear only to fabricate a new picture of history,” Oswalt, who took over the Bauhaus in March, said.

Demolishing the Marx-Engels Forum, Oswalt said, would only further reduce the limited amount of green space available in the former East Berlin. He proposes more green areas with contemporary landscape architecture instead.

Oswalt sees the failure to come up with a modern vision for the city’s historic core as part of larger series of urban planning failures around Berlin, including growing suburban sprawl on the city’s outskirts, surrounded by shopping centers and discount chains.

The Baushaus school is world-renowned for its contributions to modern architecture and design. Founded in 1919 in the eastern German city of Dessau, some of the 20th century’s most famous architects and designers, including Martin Gropius and Ludwig Mies van der Rohe, worked and studied there. It was shut down in 1933 by the Nazis and reestablished as a foundation in 1994.