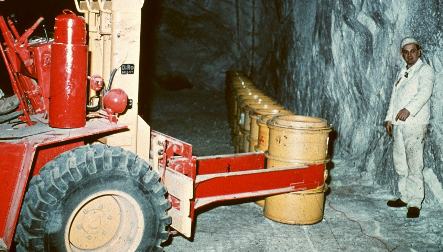 “With this health monitoring programme, we want to find out if the cases of cancer and leukaemia of former Asse workers had anything to do with the radiation exposure of their work,” BfS spokesman Werner Nording said in a statement on the authority’s website.

The BfS, which replaced the allegedly careless former proprietor Helmholtz Zentrum in January, intends to evaluate the measurements and help victims to claim benefits from accident insurance funds.

“Our aim is to get as clear a picture as possible of the work-related radiation exposure of employees,” Nording said.

Anyone who has worked at the plant for longer than four weeks between 1967 and the present day will be examined as part of the investigation. This will include people who worked either underground or above ground in direct contact with the radioactive waste.

The monitoring programme is expected to take until the end of 2010, with results to be published in a report. All the participants’ personal data will be subject to legal protection.

Officials are now trying to determine what to do about dangerous nuclear waste which has been stored at the increasingly unstable site since 1978.

In January the authorities said it had begun periodic groundwater quality checks for the nearby community of Kissenbrück, part of the Asse district, which is not connected to the public water system and is supplied by two local wells.

BfS also announced in January that an Asse storage chamber is damaged and could pose the risk of radioactive leaks. Asse has since limited employee access to the area.

Asse operators came under fire in the autumn of 2008 following revelations they failed to alert the government to serious violations and worrying conditions at the site. German Environment Minister Sigmar Gabriel responded saying that the facility has “as many holes as Swiss cheese,” adding that it remained unclear who was ultimately to blame for the serious safety violations at the site.