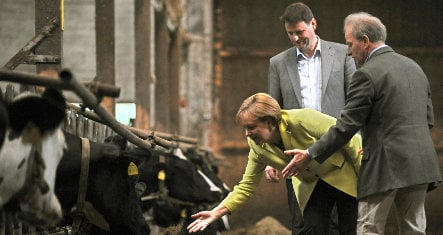 Berlin-based news daily TAZ reported that an emergency meeting on milk prices resulted in Merkel visiting a dairy farm in Lower Saxony on Thursday, showing a change of heart in the Chancellor.

Last Sunday, a group of six women dairy farmers, supported by 150 other protesters, ended their hunger strike next to the chancellery building in Berlin after failing to force Merkel to speak with them.

Many farmers across Europe are currently protesting against the falling cost of food, and Germany’s 90,000 dairy farmers are seen as particularly vulnerable to the price cuts. They currently only receive €0.20 for a litre of milk, while it is estimated they need at least €0.40 to make the business profitable, the paper reported.

But Merkel also showed there was a limit to her willingness to listen to the protests. For her trip to the dairy farm, the chancellor failed to invite the protest’s lead organisers, the German Federal Dairy Farmers Association (BDM). Instead, she chose to speak only to the state premier of Lower Saxony Christian Wulff, and as well as the heads of food retailer Edeka and the milk corporation Nordmilch.

She also held talks with Gerd Sonnleitner, head of the National Union of Farmers (DBV), a more moderate organisation aiming to protest the plight of the farmers with a more traditional procession of tractors in the capital city next Monday. The hunger strike was “not the style of the Farmers Union,” he told the TAZ.

Unlike the BDM, the DBV favours tax-exemptions and government aid rather than milk quotas, and says that dairies should merge into larger companies in order to gain more power. The BDM was set up in opposition to the DBV in order to represent and protect smaller independent farmers.