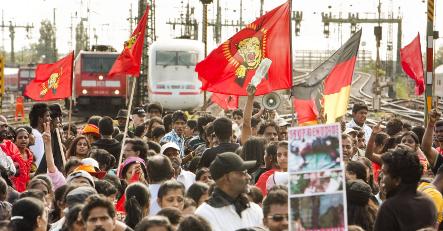 Police said the protest, meant to highlight the hardships experienced by the Tamil ethnic minority in Sri Lanka, ended peacefully. After approximately one and a half hours, the group moved to the city centre for a closing rally.

The Tamils, who make up about 18 percent of the Sri Lankan population, say the Sinhalese majority is trying to end a long-running civil war without regard for the civilian population.

The protests came after Sri Lankan President Mahinda Rajapaksa announced his country had “militarily defeated” the Liberation Tigers of Tamil Eelam – a militant organisation fighting for an independent Tamil state.