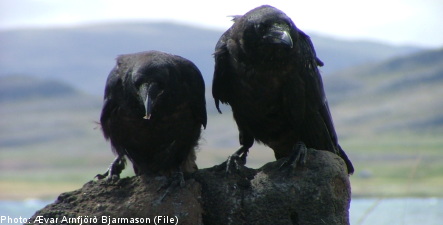 “It’s been a 20 percent loss of my production,” farmer Lennart Gunnergård told The Local.

Since February, Gunnegård has had to carry the remains of 14 calves from his cattle farm in Lerdala near Skaraborg in central Sweden which has about 75 cows and an equal number of calves.

Normally, Gunnegård loses a calf or two each year to the hungry ravens.

But this year, the area raven flock has ballooned from less than ten birds to more than 30.

“It seems there are three ravens who sort of act like the ring leaders,” he said.

On one occasion recently, Gunnegård noticed a small group of ravens swirling shortly after he had placed a yellow ear tag on a two-day old calf.

“And just after I put in the ear tag, I looked out and saw two ravens start pecking the calf’s ear tag, while two others started going for its eyes,” he said.

“I ran out and shooed them away and luckily was able to save the calf.”

Gunnegård suspects the explosive growth in the size of the raven conspiracy is likely related to the recovery of the area’s convocation of Golden Eagles.

“There are a lot more wild animal carcasses in the nearby forests,” he said.

“With more food, the ravens are breeding more and having more young.”

Others theorize that the recent covering up of local garbage dumps has cut off one of the ravens’ primary food supplies, forcing them to prey on vulnerable livestock.

Gunnegård said ravens had also claimed the lives of a lamb from a neighbouring farm, adding he thinks it’s time to consider offering affected farmers compensation for livestock lost to ravens similar to payments made for animals lost to wolf attacks.

“I’m not trying to call for help, but I think it’s time to have a discussion about how people who lose livestock due to attacks like this ought to be compensated,” he said.

Nevertheless, he’s wary of there being an overreaction and vilifying of the big black birds.

“I think the ravens are really nice. It’s just that things have got out of balance,” he said.

“There are simply too many ravens.”