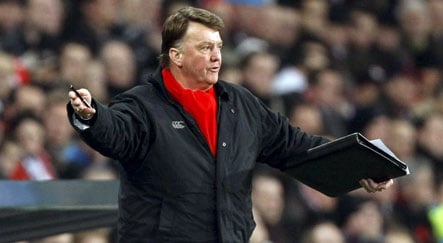 Having led AZ Alkmaar to the Dutch title this season, the 57-year-old has signed a deal with the Bundesliga champions, ending weeks of speculation over whether or not he would succeed Klinsmann, who was fired on April 27.

“We are happy to have signed an experienced and successful football coach for Bayern Munich such as Louis van Gaal,” said Bayern chairman Karl-Heinz Rummenigge in a statement.

Having steered Ajax to the Champions League title in 1995, the fiery Van Gaal has a wealth of experience having led the giants from Amsterdam to consecutive Dutch titles between 1994, 1995 and 1996.

In 1998 and 1999, he also won La Liga with Barcelona before taking charge of the Dutch national side in 2000, but failure to lead them to the World Cup finals in 2002 meant he was replaced by Dick Advocaat.

Then followed brief spells at Ajax and Barcelona, before he joined AZ in 2005 which culminated in Alkmaar winning the Dutch title on April 19 this year just after their decisive 28-game undefeated run was brought to an end. Not lacking in self-confidence, Van Gaal boldly stated: “I am the best” after winning the Dutch title and Bayern’s bosses seem to agree.

The Dutchman inherits a squad who are still bidding for the Bundesliga title and are level on points with leaders Wolfsburg with two games league remaining having beaten neighbours Bayern Leverkusen 3-0 on Tuesday.

He replaces Klinsmann who was sacked as Bayern coach after only ten months in charge following a poor run of results.

The writing was on the wall for the ex-Germany coach in early April when the German giants were hammered 5-1 at Wolfsburg before being beaten 4-0 at Barcelona as they made an early exit from the Champions League. While Klinsmann took an innovative approach, Van Gaal is not afraid to make waves or speak his mind.

Bayern captain Mark van Bommel insisted recently: “You won’t find a player who has anything negative to say about him.”

Not everyone would agree and Bulgaria striker Hristo Stoichkov contradicted Van Bommel when he once famously remarked: “Van Gaal is a total fool” after the pair worked together at Barcelona.

But Bayern boss Rummenigge has said he wants to bring in a no-nonsense football man to forge Munich into a powerful side to challenge for their first Champions League title since 2001.

“If we had wanted someone who is everyone’s darling, we would have signed George Clooney,” Rummenigge commented only a few days ago.