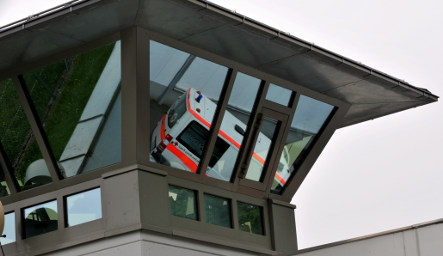 “Our prison doctors have determined he is fit to remain in custody,” a spokeswoman for the Stadelheim jail in the southern city of Munich told AFP, a day after Demjanjuk, a former Nazi death camp guard, arrived in Germany.

Doctors must still determine whether Demjanjuk is fit to undergo the stress of an inevitably lengthy trial, but prosecutors said the medical checks on John Demjanjuk, born Ivan Demjanjuk in Ukraine, could take some time.

“I don’t expect a decision this week. It will be next week at the earliest,” Anton Winkler, spokesman for the Munich chief prosecutor’s office, told AFP.

“He is not typical for his age… he is in better shape than usual for an 89-year-old,” he told rolling news channel N24.

Demjanjuk’s lawyer Ulrich Busch plans to visit his client at Stadelheim at the weekend, his secretary told AFP. Busch says his client is too ill to face trial.

The elderly suspect’s family in the United States, where he was employed for several decades as an auto worker in Ohio, had argued he was too sick to travel but this week lost their long battle to prevent his deportation.

After arriving by specially chartered plane in Germany, Demjanjuk was taken to jail and then read the charges against him: that he assisted in the murder of at least 29,000 Jews in the Sobibor death camp in occupied Poland in 1943.

Demjanjuk is suspect number three in the Simon Wiesenthal Centre’s latest report on wanted Nazi war criminals behind two others thought to be dead, and his trial could be one of the last dealing with the war crimes of more than 60 years ago.

“The positive aspect is that Nazi crimes are being prosecuted until the very last breath of the last criminal,” he told AFP. “The Demjanjuk case upholds the idea of the rule of law, by showing that criminals should not go unpunished, whatever their age.”

It is not the first time that the barrel-chested, bespectacled Demjanjuk has found himself in such a situation. He spent five years on death row in Israel before being acquitted in 1993 when the Jewish state overturned the verdict.

In that case, Demjanjuk was suspected of being “Ivan the Terrible”, a particularly brutal death camp guard who specialised in hacking at naked prisoners with a sword, but Israel established it had the wrong man.

This time, Munich prosecutors want to try him for being an active assistant in the Nazi killing machine as a guard at Sobibor, walking children, women and men to their deaths. Demjanjuk’s lawyer says his client says he was never there.

“But even if he had been there, he should still be acquitted. He comes from Ukraine and would have been a so-called foreign guard”, a prisoner of war forced into service by the Nazis, Busch said.

“Given the history of this case and not a shred of evidence that he ever hurt one person let alone murdered anyone anywhere, this is inhuman even if the courts have said it is lawful,” his son John wrote Monday.

But courts in both Israel and the United States have previously stated he was a guard at Sobibor, accusations he had never previously challenged. Prosecutors also have an SS identity card with a photograph of a young man said to be Demjanjuk and written transcripts of witness testimony placing him at the camp.

Demjanjuk is stateless, having been stripped of his US citizenship for lying about his past. Munich prosecutors say it falls on the German city to try him because he had been registered as living there after World War II.