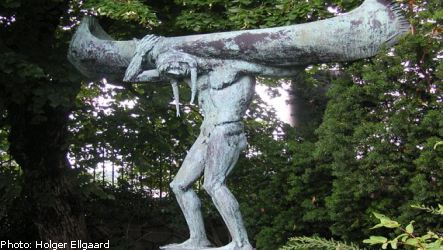 “It has not gone that well so far. We don’t have the money that they want,” said Peter Kauranen at Malmö Rowing Club to local newspaper Sydsvenskan.

“The thief has realized that the statue is so well known that it can’t be sold at auction. Now he wants to be compensated for ‘his expenses’,” Kauranen told the newspaper.

The statue, “The Indian” or “Spirit of Transportation” by Carl Milles, was donated to the club by Malmö council in the 1960s and from 1972 until last November sat outside the club’s premises.

The theft was reported to the police but the case has now been closed.

The statue has a sentimental value to the club which is reported to be short of funds to finance its return as their premises are undergoing a costly renovation.

The statue is an approved replica of an original sculpture by the celebrated Swedish artist Carl Milles which was created for the Civic Centre in Detroit, USA in 1954.

The statue was not however unveiled at its Detroit home until 1960, after Milles had agreed to a modification to meet the demands of the city’s mayor – to preserve the statue’s modesty by adding a loin-cloth to cover the genitals.