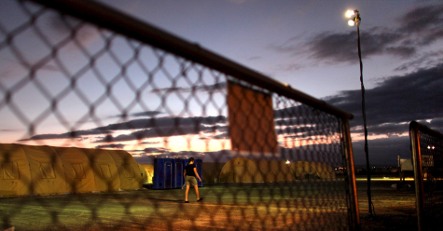 A spokesman for Interior Minister Wolfgang Schäuble said on Sunday, “A concrete request has been submitted, with names and information.”

He was responding to a story published in Spiegel magazine which suggested a list of up to ten names had been given to the German government to decide which, if any, might be offered residency.

Detailed investigations will now be undertaken to assess the danger the prisoners might pose should they in fact end up living in Germany. American authorities have already decided they pose no threat.

Discussions will also have to take place with governments of other European countries, because EU mobility rules would enable the former prisoners to move around the union.

The German government has said that the US has first-line responsibility to offer residency to the prisoners, and that should any of them apply to live in Germany, they would have to explain why they would not live in the US.

German politicians are split over how to approach the problem, with Foreign Minister Frank-Walter Steinmeier (SPD) in favour of offering residency on humanitarian grounds, while Interior Minister Wolfgang Schäuble (CDU) suggesting security considerations would count against the idea.

Jürgen Trittin, head of the Green parliamentary party, said the former prisoners should be welcomed. “These people are the victims of serious human rights violations,” he said. The US government is trying to make that good, and Germany should help, he added.