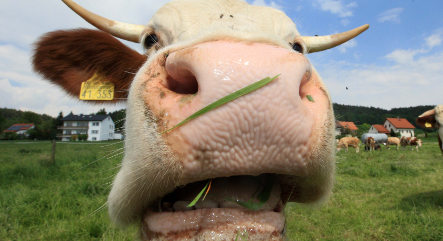 The 700-kilogramme (1540-pound) bovine charged into a group of children in the Mentrup district, tossing them into the air, police said.

Five children between the ages of six and 11-years-old were slightly injured in the dust up.

A veterinarian was eventually able to shoot the agitated animal with a tranquiliser gun, and she calmed down for a time, police said.

But shortly afterwards, the frantic cow rammed a police officer in her path, tossing him into the air too. The officer sustained light injuries.

Authorities finally managed to corner the cow in a resident’s carport and administered a second tranquiliser shot before leading her home.