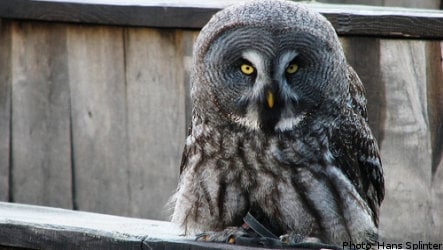 The bird, measuring 70 centimetres was found with a broken wing in a ditch in southern Småland in early March.

The bird was taken to Hässleholm Animal Hospital for an X-ray which confirmed a broken right wing, according to a report in local newspaper Kristianstadsbladet.

The actual fracture healed quickly but it will take time before the wing is serviceable again.

The Lapland Owl, also known as the Great Grey Owl, is now in the care of an animal catastrophe help group in Allarp in Skåne.

During its convalescence the bird has become used to a modified diet of chicken and rabbit instead of lemmings and other small rodents.

The Lapland Owl is a true rarity in southern Sweden. In Skåne it has only been spotted on a total of five occasions since 1913.

According to the newspaper’s bird expert, Patrik Olofsson, a Lapland Owl turned up in Vitaby, Österlen last autumn and another only a few days later in Falsterbo.

He believes that the owl, when it is released, will return to familiar ground in the far north of Sweden. The owl habitually breeds in the provinces of Norrbotten, Västerbotten and Jämtland with a small number in Ångermanland, Medelpad, Hälsingland, Dalarna and northern Västmanland.