Following a raid on the brothel last Thursday, the police say they found eighteen women on the premises, some of whom are thought to be under age, reports the Philippine daily Sun Star. They will be called as witnesses when the trial begins.

One of the women was working as a domestic servant when she was offered another, well-paid job. She explained to Sun Star that she had no idea what the work entailed. When she learned that it involved undressing in front of a webcam it was already too late to back out. She said that she was paid the equivalent of about 2,500 Swedish kronor a month.

Another four people, reported to be employed by the Swedes, were also arrested.

The Swedish Ministry for Foreign Affairs has spent the day seeking confirmation of reports about the arrested men.

“We are trying to establish whether the Consulate-General in Manila has been informed. When we know the full facts of the case, we’ll try to get in touch directly with the men or their lawyer,” said Petra Hansson of the Ministry’s Press Service to TT. 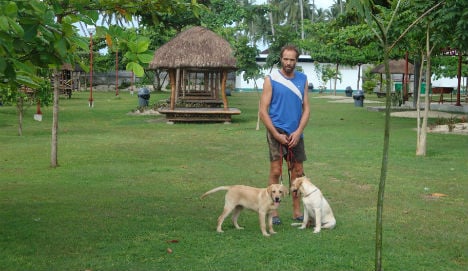 Kjartan Sekkingstad may soon be reunited with his dogs. Photo: Private / NTB scanpix
Kjartan Sekkingstad and the  Indonesians, who had been held by Abu Sayyaf militants, were handed over to envoy Jesus Dureza in the town of Indanan on Jolo island, said an AFP reporter at the scene.
The transfer took place at the heavily guarded camp of another Muslim rebel leader Nur Misuari, whose group assisted in the release according to the government.
Sekkingstad was abducted from a high-end tourist resort which he managed in September 2015, along with two Canadians who were later beheaded. It was still unclear if the three freed Indonesians were the same ones kidnapped by armed men off a fishing trawler in Malaysian waters in July.
The Abu Sayyaf freed Sekkingstad on Saturday, handing him over to Misuari who is engaged in peace talks with the government and at whose camp he spent the night, Dureza said earlier.
Escorted by a small contingent of Jolo police, Dureza, Misuari, the freed captives and local officials met in a building surrounded by hundreds of Misuari's fighters from the Moro National Liberation Front before leaving for a military camp, the reporter said.
The military has said that after a medical check-up and debriefing, Sekkingstad would fly to the southern city of Davao to be received by President Rodrigo Duterte.
John Ridsdel and Robert Hall, the two Canadians seized with Sekkingstad, were beheaded after a ransom demand of about 300 million pesos ($6.5 million) was not met.
Duterte's spokesman Martin Andanar said in Manila that “the government maintains the no-ransom policy”.
“Now, if there is a third party like his family that paid, we do not known anything about that,” he told reporters.
Norwegian foreign affairs communications chief Frode Andersen told AFP by phone that “the Norwegian government does not pay ransom in this case or any other case”.
However a spokesman for the Abu Sayyaf was quoted in a local newspaper on Sunday as saying the group received 30 million pesos (about $625,000) for the Norwegian.
The Abu Sayyaf is a loose network of militants formed in the 1990s with seed money from Osama bin Laden's Al-Qaeda network. It is based in remote Muslim-populated southern islands in the mainly
Catholic Philippines, and has earned millions of dollars in ransom from kidnappings — often targeting foreigners.
While its leaders have in recent years pledged allegiance to the Islamic State group, analysts say the Abu Sayyaf is mainly focused on a lucrative kidnapping business rather than religious ideology.
The group, which is blamed for the worst terror attacks in Philippine history and is listed by the United States as a terrorist organisation, has been the target of a military operation since August.
Url copied to clipboard!