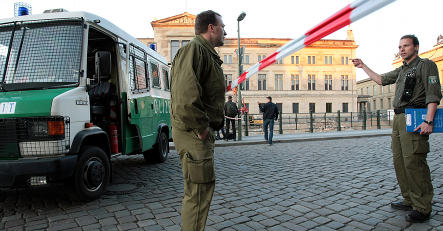 The 100-kilogramme bomb was discovered by construction crews working near the New Museum on the Museum Island. According to police, the explosive was a Soviet aircraft bomb, probably dropped in the closing days of World War II.

Train traffic through the centre of the city was disrupted, a performance at the Maxim Gorki theatre was cancelled and the famous Unter Den Linden avenue was closed to traffic. Chancellor Merkel’s apartment was within the 300 metre radius that was evacuated, forcing her to leave the building, the daily Tagesspiegel reported.

Berlin police reported massive traffic jams in the area for over an hour. Bomb disposal experts successfully removed the explosive and later detonated it at a special facility around midnight.

Berlin was a prime target for bombers during World War II and construction crews regularly come across unexploded bombs 64 years after the war ended.