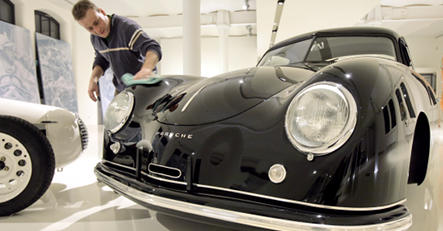 Stuttgart-based Porsche AG has €3.3 billion worth of debt in needs to repay in the next year at a time when global credit markets remain nearly frozen. In total, the maker of wold-famous sports cars has over €9 billion in debt and is having to make interest payments from using cash from its core business, which is suffering due to the global economic slowdown.

A deal with the Emir of Qatar would give the company access to cash that desperately needs to avoid a crunch, the magazine reported. The article did not mention how much the Emir hoped to invest in the company.

Porsche took on the mountain of debt to finance a takeover attempt of Wolfsburg-based Volkswagen AG, which is Europe’s largest carmaker and many times bigger than Porsche. Last week, media reports said a dramatic change of course was underway and Volkswagen might instead buy Porsche to relieve the smaller company of its debt burden. Currently, Porsche owns 50 percent of Volkswagen and has said it hopes to raise its stake to 75 percent.

“It’s not a question of years, rather it’s of a few months,” before the two are replaced, an unnamed source close to the family told Spiegel.