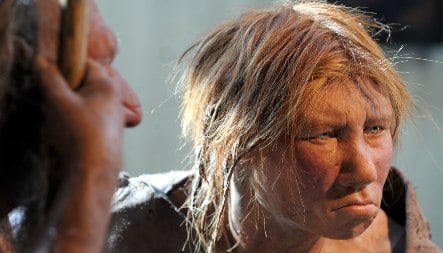 Mum? Is that you? Photo: DPA

Scientists have long known that human childbirth is much more painful than in other mammals due to our large heads, but a new study using computer models argues Neanderthal mothers didn’t have it any easier.

Tim Weaver of the University of California in Davis and Jean-Jacques Hublin of the Max Planck Institute of Evolutionary Anthropology in Leipzig carried out the study using computer reconstructions of a female Neanderthal pelvis. These were then compared to those of modern human females for clues as to evolutionary differences.

The researchers concluded that the human birth mechanism itself – the unique “corkscrew” motion with which a baby normally exits the birth canal – was virtually non-existent in Neanderthals, placing them in a category with primates and other mammals.

“While Neanderthals developed features for colder climates such as broad shoulders and pelvises, human ancestors originated in warmer Africa, where they found themselves doing a lot more running,” Hublin told The Local.

“Since a broader pelvis can hinder the ability to run upright, natural selection likely led to smaller pelvises in humans – and the birth canal had to find a way to work around that.”

Hublin said he hopes the findings will shed light on the field of life history – including explanations for the survival of Homo sapiens as opposed to several other known species of human-like hominoid, which died out some hundreds of thousands of years ago.

He added that the field of research benefits from such findings as they contribute to the modern understanding of one of the most peculiar of all evolutionary tracts – that of humans.