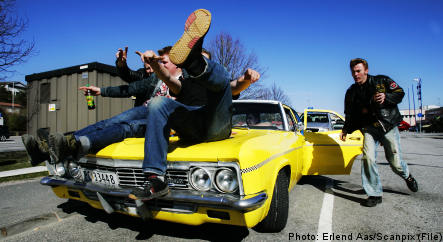 Local authorities in the town countered the charge with a Salvation Army festival of brass music.

But residents are more than aware that the day’s main attraction is the spontaneous cortege of primarily Norwegian cars snaking around the outskirts town. The town centre has been sealed off.

“But regular Strömstad residents are being let through the police road blocks,” said Palmblad, who added that it was easy to tell the difference between locals and new arrivals.

“The latter are unusually boisterous, displaying what one might call an an extroverted joy, as they play loud music and wave Norwegian flags.”

Palmblad said a lot of locals were also out and about, “looking at it all with terrified enjoyment.”

By lunchtime, police had already arrested five youngsters for drunkenness and fighting.

“I don’t see any indications that it has become calmer this year,” said police sergeant Torbjörn Hansson.

“It’s a tradition for the Norwegians to come here and we’re prepared for it. It’s mainly young Norwegian men we’re having trouble with.”