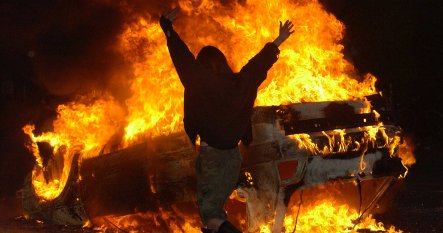 An anarchist celebrates at May Day in Kreuzberg in 2003. Photo: DPA

According to Berlin police figures, over 70 cars – mainly upmarket models such as BMWs and Mercedes Benzes – have already been torched since January, compared to just over 100 for the whole of last year.

And as May Day approaches, arson attacks and other violent incidents have intensified – scarcely a night passes without more burnt-out cars on the streets and assaults on businesses throughout the city.

Violence has marred May 1 in Berlin for more than two decades, but a police strategy of restraint and de-escalation, combined with the swift arrest of troublemakers, has sharply reduced related crime in the past three years.

Nevertheless, police are bracing themselves for major protests throughout the city. “We are preparing ourselves, we are planning our force deployment accordingly,” police spokesman Thomas Goldack said.

The radicals are getting ready too.

In the early hours of Wednesday, around 250 left-wing activists gathered in a park in the Berlin district of Prenzlauer Berg, built a huge bonfire from stolen wooden pallets and threw bottles at a passing unmarked police car.

Meanwhile, two BMWs and a Volkswagen were torched in a different part of Berlin, with police saying they “could not rule out a political motive” for the acts.

In another act of apparently politically inspired violence earlier in the week, masked hooligans lobbed bottles and stones at the offices of German software company SAP.

More than 1,000 police officers are expected to be mobilised in case of violence on May 1.

Goldack said protests against this month’s NATO summit on the Franco-German border and the G20 meeting in London had apparently galvanised the violent parts of the left-wing activist movement.

“We saw a similar rise” in the run-up to the G8 meeting in Germany two years ago, he said.

Violent demonstrations by militant vandals against creeping gentrification in some of Berlin’s left-leaning districts are also on the rise.

In Friedrichshain-Kreuzberg, the epicentre of the unrest in recent months, four different bars and cafes have found themselves the targets of particularly nasty attacks, including the spraying of foul-smelling butyric acid in toilets.

Anger has also been stoked both by the global financial crisis, which is hitting Germany hard, and rising rents in formerly cheap neighbourhoods.

Anna Schneider, a spokeswoman for the organisation “United We Stay” told AFP that “30,000 people face the risk of not being able to afford living” in the borough any more.

One resident, Gabriele Weser, who has lived in the district for 50 years, said her apartment was renovated in 1997 and the rental price has since rocketed.

She is convinced that “the soul of the neighbourhood has been sold to the capitalist devil.”

Rising unemployment and economic gloom, combined with the seething anger of many from Berlin’s poorer districts could erupt in violent clashes during some of the city’s 26th May Day demonstrations.

The protesters are also steeling themselves for an especially active May Day. According to one activist website, antifa.de , more than 20 different groups are set to march under the banner “Capitalism = War and Crisis.”

They are also set to target 1,000 neo-Nazis who are planning to march in southeastern Berlin.

“Burn, capitalism, burn,” the slogan on the site says.