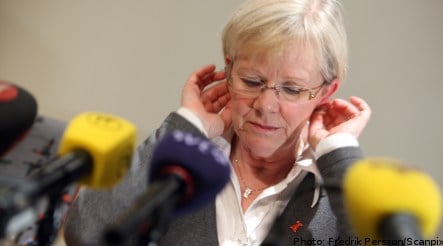 The LO board was called to a meeting to discuss the position of Lundby-Wedin after Social Democrat leader Mona Sahlin blamed her role in the AMF Pension scandal on the party’s dramatic fall in two separate opinion polls published on Saturday.

Mona Sahlin’s demanded on Saturday that Lundby-Wedin leave the board of AMF Pension and focus on her work at LO.

The LO board confirmed in a statement after the meeting on Sunday afternoon that its national leader would leave her positions on the board of AMF, AFA and Aftonbladet as well as several internal union posts.

The telephone meeting was convened at 3pm and lasted just over an hour. Talks will resume at LO’s Stockholm head office on Monday.

“We have decided that we want to sit in the same room and continue the talks,” said LO board member Hans-Olof Nilsson to news agency TT.

The two opinion polls published on Saturday showed a dramatic fall in support for the Social Democrats and established the Moderates as the largest political party in Sweden.

Social Democrat party secretary Ibrahim Baylan, after the polls were published on Saturday, laid the blame squarely on the AMF Pension scandal and media focus on the role of the trade union chief.

Ulf Bjereld, professor in political science and a Social Democrat party member, believes that Wanja Lundby-Wedin will be forced to resign from her post as LO chief.

Without the full support of the Social Democrat leadership it is difficult for her to retain her post, he argues.

“I judge it extremely difficult for Wanja Lundby-Wedin to keep her position in the current climate. Her political credibility has been seriously damaged so it would be difficult for her to play a constructive role in a future election campaign,” Bjerfeldt told news agency TT.

News agency TT asked LO board member Ella Niia if the organization can retain a leader who has been so openly criticized by the Social Democrats.

“To connect the (poll) collapse with Wanja Lundby-Wedin is too simplified. This is a trend we have seen over a long period,” Ella Niia observed.