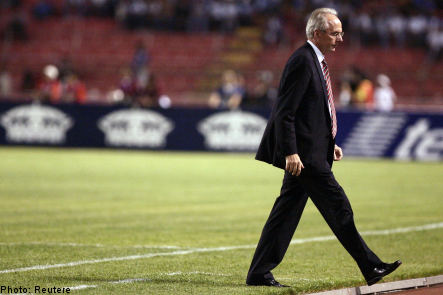 The Mexican Football Federation said on Thursday it had fired the Swede as national coach after Wednesday’s 3-1 defeat.

Wednesday’s defeat was Mexico’s second loss in three matches in the final phase of qualifying in the region coming hot on the heels of a reverse to the United States sandwiched by a home success over Costa Rica at the Azteca Stadium in Mexico City.

Eriksson had acknowledged before the Costa Rica encounter that he knew he was under pressure to deliver with media predicting his days were numbered after just 13 matches at the helm.

“The decision was made because we could not risk Mexico’s participation in the World Cup,” said federation president Justino Compean, who, noting poor away form, added it was not sufficient to rely wholly on winning home matches.

The midweek loss in San Pedro Sula was only the latest in a series of poor showings on the road.

“This morning we had a meeting with Eriksson and we told him his spell with the Mexican team had come to an end,” added Compean.

Eriksson, who angered supporters by bringing four foreign-born players into the squad, said he regretted not having longer to prove his credentials.

“I enjoyed the work, the country, everything. Sooner or later patience runs out,” said Eriksson, who won a swathe of honours with IFK Gothenburg in his homeland before further successes with Portugal’s Benfica and then in Italy with AS Roma, Sampdoria and Lazio, with whom he won Serie A prior to taking the England job.

“It’s a shame because I always thought I would be in the Mexico dugout for a World Cup as Mexico are going to qualify,” said the Swede, who readily admitted that poor away showings were to blame.

“We did not play well away from home and this is my responsibility.”

Compean said a replacement would be lined up within days with the media quickly putting their money on former incumbent Javier Aguirre, who recently left Atletico Madrid, with Jose Manuel de la Torre of Mexican champions Toluca another name in the frame.

When in charge of England, Eriksson appeared to have inherited a ‘golden generation’ of players including the likes of David Beckham and Steven Gerrard.

A turbulent season with Manchester City followed before he took, to general surprise, the Mexican job but after patchy results ahead of the win over Costa Rica he admitted: “We must win or life will be very difficult for me – I will probably be out of work.”

Reports in the English media have in recent days linked him with a return to the English Premiership with struggling Portsmouth following Pompey’s sacking of Tony Adams.

Three teams from the six-nation final phase of qualifying advance directly to the 2010 World Cup finals in South Africa, with the fourth-placed team playing off for a berth against the fifth-placed team from South America.

Mexico were not overly impressive even in the first phase of qualifying which included, among other sub-standard showings, a loss to Jamaica.