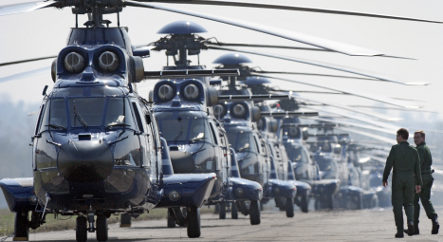 US President Barack Obama will be joining 27 leaders for the gathering marking the alliance’s 60th anniversary at venues on both sides of the Rhine river that are symbolic of Franco-German reconciliation after World War II.

Between 30,000 and 60,000 protesters – from radical leftists and anarchists to peaceniks – are also converging on Strasbourg with the stated aim of disrupting the two-day summit.

France is deploying 10,000 security forces including crack anti-riot police while Germany is positioning 14,600 forces and has called on 600 soldiers for the security operation.

Air space over Strasbourg and Baden Baden will be shut down and access to some highways cut off as one of the biggest security operations in years goes into full swing.

French Interior Minister Michele Alliot-Marie said the security measures are the most extensive for an international gathering in France since the Group of Eight summit in the Alpine city of Evian in 2003.

She said it was necessary to protect residents, foreign dignitaries and demonstrators from “extremists who have already made clear, including on the internet, that they intend to provoke or cause violence.”

Of the tens of thousands of anti-NATO protesters set to take part in a march on Saturday, about 2,000 are considered violent and dangerous, according to Alliot-Marie.

The mass protest starts off in Kehl on Saturday, under the watchful gaze of police, and will cross the Europe Bridge to Strasbourg.

Reviewing preparations for the summit, Alliot-Marie said Monday there were “a certain number of symbols that could be targets for anti-establishment activists and there is a threat of terrorism or extremism.”

She singled out the war in Afghanistan, the 60th anniversary of the alliance and France’s return to the integrated command as possible lightning rods for violent protest during the summit of the North Atlantic Treaty Organisation.

In a possible foretaste of the trouble ahead, police and anti-NATO militants clashed late Tuesday near a “peace camp” set up by activists outside Strasbourg, police and witnesses said.

About 150 activists were protesting intensified identity checks when the scuffles broke out, with police firing tear gas and protesters hurling rocks at police cars.

French border authorities have refused entry to some 20 suspected radicals including five people who drove up to the border in a van stocked with vegetables to provide vegan meals at the “peace camp.”

Two high-security Orange and Red zones have been set up around the summit venue in Strasbourg and residents have been given special badges allowing them to walk around their neighborhoods.

On Wednesday, about 100 activists, some dressed in clown suits, marched in Strasbourg in protest at the “security circus” surrounding the gathering.

The summit formally opens in Baden Baden, some 70 kilometres (40 miles) from Strasbourg on Friday evening, with a working dinner at the Kurhaus spa resort hotel.

The 28 leaders then travel to Kehl on Saturday for a group photo before crossing the Rhine to Strasbourg for a meeting of the North Atlantic Council, NATO’s top decision-making body.