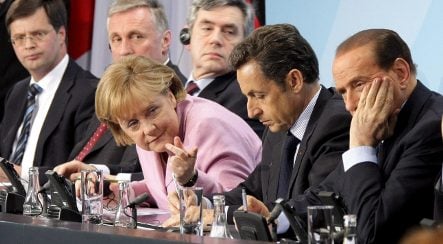 “I am going to London with a mixture of confidence and concern. Concern on one hand on whether we can really react to the serious situation, on whether we are not playing things down and making them out to be better than they are,” Merkel told reporters in Berlin.

“Confident, however, that in view of the extremely difficult situation, we cannot stick our heads in the sand, that we have to act and also recognise our responsibilities,” she said. Merkel also said that further stimulus packages to boost the ailing global economy could be a topic at the summit of the leaders of the world’s 20 leading industrialised and emerging economies in the British capital.

“I cannot rule out that it will be a topic,” Merkel said. “We in our opinion have made a huge contribution.”

Germany, Europe’s biggest economy, has resisted calls to do more to pull the country out of its severest recession since World War II, saying that two packages already announced — worth €80 billion ($105 billion) — have yet to take effect.

The government is also wary of spending beyond its means, and prefers to keep its powder dry in case the crisis dramatically worsens, which could require it to bail out a fellow eurozone member.

Merkel has also stressed that as a major exporter, Germany is highly dependent on conditions elsewhere. Germany, backed by its European partners, wants the G20 summit to focus on rewriting the financial rulebooks in order to prevent another financial crisis from happening — and not on whether to launch new stimulus measures.

Merkel said the main goal of the London summit was to draw lessons from the financial crisis for the future and to ensure the global economy emerges from the recession in a strong position.

But Berlin has found itself under attack from some G20 members for its perceived caution.

Japanese Prime Minister Taro Aso told the Financial Times Wednesday: “I think there are countries that understand the importance of fiscal mobilisation and there are some other countries that do not — which is why, I believe, Germany has come up with their views.”