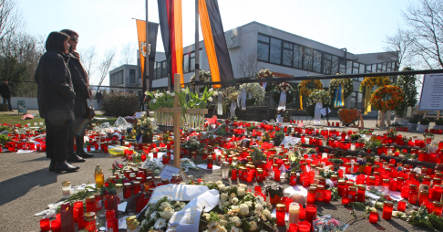 The school where 17-year-old Tim Kretschmer went on the rampage nearly two weeks ago remained closed however and lessons for the some 600 pupils at the Albertville Realschule in Winnenden near Stuttgart were held elsewhere.

Teaching at the secondary school had been suspended since Kretschmer’s massacre – carried out with a gun taken from his father’s bedroom – with regular lessons being replaced by psychological counselling sessions.

Kretschmer returned to the school that he had left last year with average marks on the morning of March 11, dressed in combat gear. He went to several classrooms, picking off his victims mostly with expert shots to the head.

All but one of those killed at the school by the teenager were female. Kretschmer reportedly went into classroom 10d three times, hissing on the third visit: “Aren’t you all dead yet?”

With police by this stage at the school, Kretschmer proceeded on foot to a nearby clinic where he had been due to receive treatment for depression, shooting dead his 13th victim outside the building.

Meanwhile an unsuspecting Igor Wolf was sitting in his Volkswagen waiting for his wife, when Kretschmer yanked open the back door, jumped into the back, shoved his nine millimetre Beretta in Wolf’s face and said: “Drive. Quickly.”

Wolf later said in a magazine interview that Kretschmer had told him that his killing spree was all “for fun” and that he wanted to find another school. At one town, “we stopped at traffic lights. I thought about just tearing the door open and running away. But there were other people going about their business. A woman with a pram, other children.”

Wolf’s roughly two-hour-long ordeal came to an end when he deliberately crashed the car and fled with the keys, forcing Kretschmer to continue on foot.

Kretschmer was now around 40 kilometres (25 miles) from the school in the town of Wendlingen, where his rampage was to end – but not before victims 14 and 15 were dead.

A massive police operation was on his trail, with hundreds of armed commandos assisted by helicopters and dogs, and Kretschmer’s short life ended after a dramatic shootout with police in a car park. Investigators believed he turned the gun on himself.

On the surface, there was little to indicate that Kretschmer was a mass killer in the making – an “unremarkable” and “reserved” trainee salesman who enjoyed working out at the gym and was a keen table-tennis player.

With the benefit of hindsight, however, there were some clues: he had been suffering from depression, enjoyed grisly horror movies and violent “shoot-em-up” computer games.

The massacre has prompted much soul-searching in Germany, where gun laws were tightened considerably in the wake of a massacre at a school in Erfurt in 2002 that left 17 dead including the gunman.

Chancellor Angela Merkel and President Horst Köhler attended a memorial service on Saturday in the town, beamed out on some 20 giant screens to the 7,500 people outside.

Köhler backed families of the victims who appealed in an open letter for even stricter gun laws and a ban on gory video games.