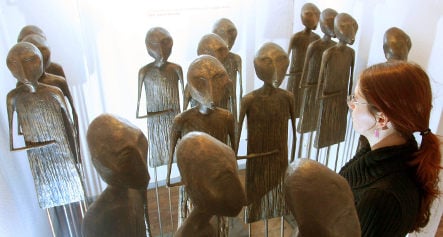 A memorial artwork at Ravensbrück. Photo:DPA

“They told us we were in the camp brothel, that we were the lucky ones. We would eat well and have enough to drink. If we behaved and fulfilled our duties nothing would happen to us.”

So begins the wrenching account of Frau W., a prisoner of the Nazi concentration camp Ravensbrück north of Berlin who was forced to work as a sex slave for her fellow detainees.

Her story forms the centrepiece of a new exhibition at Ravensbrück about the fate of women pressed into prostitution between 1942 and 1945, like Asia's ‘comfort women’ during World War II.

SEE ALSO: Five things to know about prostitution in Germany

But rather than servicing soldiers, these women were made to have sex with the forced labourers – an idea from SS chief Heinrich Himmler to increase productivity try to prevent homosexuality from ‘breaking out’ among their ranks.

Their numbers were far smaller than the tens of thousands of ‘comfort women’ kidnapped across Asia to serve Japanese troops.

Most of the sex workers were taken from the women's camps at Ravensbrück and Auschwitz to ‘brothels’ at 10 camps in Germany and the Nazi-occupied eastern territories.

The vast majority had been imprisoned for ‘anti-social’ behaviour – a crime arbitrarily defined under Hitler to include prostitutes but also women with suspect political ties or relationships with Jews.

Those prisoners who had a privileged place in the camp hierarchy – exhibition curator Michael Sommer estimates about one percent of the forced labourers – could buy up to a quarter of an hour with one of the women for two Reichsmarks from the pittance they earned in the Nazi-run factories.

A fraction of that amount was credited to women’s camp accounts which they could use for food when it was available.

“The sex work was organised very bureaucratically,” said Sommer, showing prisoner files with the code 998 signifying a prostitute and vouchers used by men allowed to visit the camp brothel.

No Jews worked at the brothels or were allowed to patronise them, and separate facilities were created for camp guards.

Prostitutes were regularly tested for sexually-transmitted diseases to prevent outbreaks at the camps. Pregnancies were compulsorily ended by abortion.

“The irony was that while the Nazis tried to regulate prostitution in German cities, they institutionalised it at the camps,” Sommer said.

Some women volunteered for service in the brothels, which were heated and had slightly better hygienic conditions, after being promised early release from the life-threatening conditions of the camps.

Others only learned of their fate when the first patrons were ushered in.

Another woman whose testimony is featured in the exhibition, identified only as Frau B., said each woman worked in a small room where she received up to 10 men in two hours.

“There was a spy hole and sometimes the guards would peek in and sneer,” she said.

“But you know, we were so numb that we just thought, ‘Get stuffed, you bastards’.”

Although the months in the brothel left her permanently scarred, Frau B. said the men who visited her were by and large decent.

“They had also been locked up for years and were happy to have human contact,” she said. Sometimes, the men just wanted to talk.

Many of the political prisoners boycotted the brothels. Communists at Buchenwald were convinced the bordellos would be used by the SS to spy on prisoners.

Although nearly all the sex workers survived until the camps were liberated, there is scant evidence any were released early for service rendered.

After the war, most of the German women kept their experience hidden, out of shame or trauma, while foreign victims feared being seen as collaborators.

None received recognition from the German state as victims of sex slavery or compensation for their ordeal. Few, if any, are still alive today.

Eschebach noted that sex slavery has only been recognised as a war crime under international law since 2002 and said the more recent occurrences of mass rape in Bosnia and Rwanda, as well as the demands of Asian ‘comfort women’ for justice, had prompted more research in Germany.

The exhibition can be seen at Ravensbrück until March 8, after which there are plans to take it to Dresden, Bielefeld and then Rome.