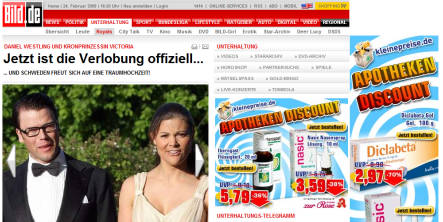 “It might be that half the country is on holiday here for Shrove Tuesday the last day of Karneval, but the news about Princess Victoria is being widely covered in Germany,” said Marc Young, editor of The Local Germany.

The Swedish royals are particularly popular in Germany, largely due to the fact that Queen Silvia has German roots. Bild, Germany’s most popular tabloid, splashed the news of the engagement over the top of its website.

“The Germans have quite an extensive range of royals, but since the country is a republic, they do tend to have a vicarious interest in the blue-bloods in the rest of Europe. The Swedish royal family is quite popular here because the Queen is considered half German and the rest of the family speak the language fairly well,” said Marc Young.

Sweden’s royals have frequently clashed with German tabloids over false stories regarding the younger members of the family. German magazines have claimed, among other things, that Princess Madeleine had sworn love for Britain’s Prince William over Princess Diana’s grave and that Victoria had been given a secret ‘love island’ by the King.

Coverage of the wedding in the major newspapers has so far been somewhat more respectful. At the more serious end of the spectrum, conservative daily Die Welt praised Victoria:

But other parts of the press are highlighting Westling’s humble origins and that he might not be ‘good enough’ for Princess Victoria. The sensationalist Bild said ‘Sweden is thrilled about a dream wedding’ but then followed with ‘HE is a fitness trainer, SHE is the future Queen of Sweden.’