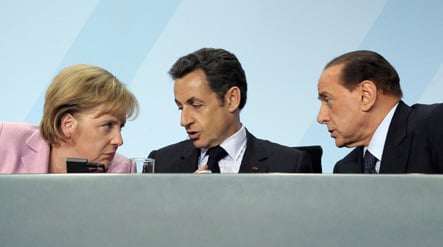 The leaders of Britain, France, Germany, Italy, Spain and the Netherlands met in the German capital to hammer out a joint European stance for the Group of 20 meeting of developed and developing countries in London on April 2.

They agreed upon the need for greater regulation of stock markets and to double the IMF’s funding in order to avoid repeating the unprecedented economic downturn of recent months.

They said that “all financial markets, products and participants – including hedge funds and other private pools of capital which may pose a systemic risk – must be subjected to appropriate oversight or regulation,” a summary of the meeting said.

Chancellor Merkel said the Europeans were determined that a strengthened, better-regulated financial system would emerge from the wreckage of the deepest financial crisis for decades.

“It’s not a case of talking up the situation but we want to send the message that we have a real opportunity to come out strengthened from this crisis,” Merkel told a press conference with her European counterparts.

Merkel admitted that details of how hedge funds and complex financial products would be regulated still needed to be worked out. But the stance on hedge funds – highly speculative and lightly regulated entities that have been accused of fuelling instability in financial markets – represents a shift in the long-held position of countries such as Britain.

The leaders also agreed to add an extra $250 billion, doubling the current level of funding, to the International Monetary Fund (IMF) budget to allow it to intervene to prevent future financial crises.

British Prime Minister Gordon Brown said such a reinforced IMF would be able to help countries in central and Eastern Europe which are swept up in a growing economic crisis as western European banks withdraw credit.

“We need international action to help for example in central and Eastern Europe where a number of foreign banks have withdrawn to their home banking territories and where it is difficult to recapitalise the rest of the banking system and restructure it without the support of the international financial institutions,” Brown said at the conference sitting next to Merkel.

“So we are proposing today… a $500-billion (€390-billion) IMF fund that enables the IMF not only to deal with crises when they happen but to prevent crises.”

French President Nicolas Sarkozy said the stakes for the April summit – which will be attended by US President Barack Obama – were high.

“By April 2, we have to succeed and we cannot accept that anything or anyone gets in the way of that summit which will bear a historical responsibility… if we fail there will be no safety net,” he said.

The world’s major economic powers are under pressure to build on pledges made at the G20 summit in Washington in November, where they formulated an action plan for fighting the crisis.

But the global recession has worsened since then, prompting governments to push through massive economic stimulus packages and overshadowing efforts to reform the global financial system.

The national stimulus plans have sparked fears of protectionism that could hinder efforts to present a united European front.

The end-of-meeting statement however gave a watered-down assessment of protectionism, saying that Europe would only take “measures that keep distortions to competition to an absolute minimum, and we expect the other G20 states to behave likewise.”