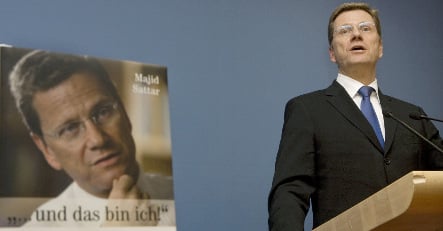 But the man who was once the biggest joker in the often staid world of German politics has few laughing now – his electoral strength will likely determine whether Chancellor Angela Merkel can win re-election with her coalition of choice in September’s general election.

Merkel has run Europe’s biggest economy for four years in a ‘grand coalition’ with the Social Democrats, SPD, the conservatives’ traditional rivals.

Now, after 11 years in opposition, Westerwelle appears ready to shake off his at times foppish image and become a kingmaker in the next government, and possibly Germany’s first openly gay foreign minister.

“Of course I made some mistakes when I was young but one grows older and wiser,” the 47-year-old told AFP when asked about his more memorable publicity stunts.

“But the Germans seem to see us positively – otherwise they wouldn’t have given us one of the best results in our history during the last national election.”

Since that 9.8 percent score in 2005, the FDP has seen its support soar to within four points of the SPD, Germany’s oldest political outfit and one of the two traditional ‘people’s parties’ that lead ruling coalitions.

It scored a stunning 16 percent in an election last month in Hesse, one of Germany’s wealthiest states and home to the banking capital Frankfurt.

The FDP’s star has risen largely due to the weakness of the major parties, but it also comes despite the financial crisis, when voters might be expected to be more sceptical about the FDP’s liberal platform of lower taxes and smaller government.

Westerwelle, seen as one of parliament’s most gifted debaters, attributed the his party’s strength to its focus on the middle-class.

“Lawlessness, anything goes, the law of the jungle – that has nothing to do with liberalism,” he said.

“But apparently voters think the middle-class needs to be better represented. Instead, a lot of people have only been looking out for those on top – the so-called locusts.

“Or they have been looking out for those on the bottom on Hartz IV,” the welfare programme for the long-term unemployed.

Westerwelle, a trained attorney, said he was ready to become foreign minister if the FDP joined the government – a traditional role for the junior coalition party.

“The answer is yes, otherwise I would not have become chairman of the FDP,” he said, before making repeated references to respected former FDP foreign minister Hans-Dietrich Genscher.

He said he stood by the ‘basic tenets’ of German post-war foreign policy, but cited nuclear non-proliferation, including calling for the withdrawal of the up to 150 US warheads stationed in Germany since the Cold War, as a priority.

Westerwelle dismissed concerns raised here in the media about whether his homosexuality could present problems if he became Berlin’s chief diplomat.

“I am convinced that today one’s private life is no longer an obstacle. Some other countries may have had a problem with the fact that Angela Merkel became the first female chancellor of Germany. Of course she does not wear a veil on the red carpet when she visits certain Arab states,” he said.

“The American secretary of state (Hillary Clinton) must also hold talks in countries in which women are systematically oppressed.

“The decision as to who we send as a government representative rests solely with us Germans based on our political and moral standards.”

As for his stint on reality-TV and the bright yellow ‘18’ he used to paint on the bottom of his shoes, Westerwelle said Germans appreciated a politician who did not take himself too seriously.

“Maybe the Germans aren’t as uptight as people abroad sometimes think,” he said. “Hans-Dietrich Genscher once told me: ‘Human misery always goes back to politicians who weren’t able laugh at themselves occasionally.’”