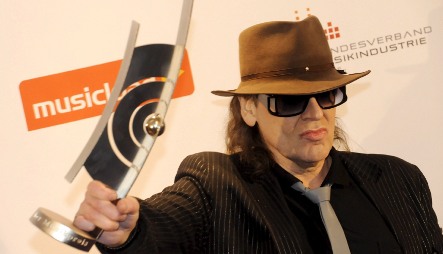 Still pouty after all these years. Photo:DPA

Spectators at Berlin’s O2 arena were entertained by U2, Depeche Mode, The Scorpions and Udo Lindenberg during the ceremony, Die Welt newspaper reported on Sunday.

Happily for those who like their music a little more contemporary, the big winner was Peter Fox, lead singer and founder of popular reggae band Seeed, who is carving out a solo career. He carried off three awards for best hip hop, best producer and the critics’ prize.

Newcomer of the year was Thomas Godoj, winner of a German talent show.

Another sign of the times was an award for Paul Potts, a British talent show winner, whose version of the opera favourite “Nessun Dorma” has been used in a German television advert.

Scottish singer Amy MacDonald also performed and won an award, meanwhile Lionel Richie was present to accept the honourable award for the Motown record label, which celebrates its 50th anniversary this year.

German heavy metal band The Scorpions received an award for their life’s work, the same award given to Udo Lindenberg back in 1992. This year Lindenberg was crowned “Best National Artist’ – and promptly performed his classic “Woddy Woddy Wodka,” appearing on stage in a space suit.