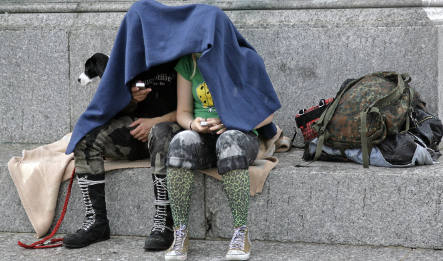 You can run, but you can't hide. Photo:DPA

An internal memo on the topic has been obtained by the Hamburger Morgenpost, and suggests a ban of such socially marginalised groups to ensure ‘security and cleanliness’ in the shopping area.

It would not matter whether these ‘persons from the marginal scenes’ had done anything illegal, according to the paper. Groups of two or more such people would be enough for a temporary ban from the area until the shops close.

The paper quotes from the memo which says, “It is not acceptable that benches or areas… are claimed and thus are no longer available for the general public.”

It suggests that if two men who look like punks meet up in public, sit on a bench and drink a beer, they could be stopped and thrown out of the inner city until the end of the shopping day.

Apparently not only uniformed, but also plain-clothed police officers would be used in such operations.

Police spokesman Ralf Meyer told the paper, “It is not an offensive against individual homeless people.”

He said the idea was designed to take on a group of up to 50 punks and Goths who gather on the famously snooty Rathausmarkt and Jungfernstieg in the city centre, making a mess, breaking bottles and allowing their dogs to run around.

“We know from our experience that we do not need to wait until they really do anything. We will intervene if individuals from this group sit themselves down there.” He said this had been checked by lawyers.

But the proposal is unlikely to stand, the paper reported, pointing out numerous previous attempts to ban drinking in public, or begging in the city centre.

Sebastian Scheerer, head of the Institute for Criminological Social Research at the city’s university, said the plans constituted an, “obviously illegal criminalisation of certain milieus.”