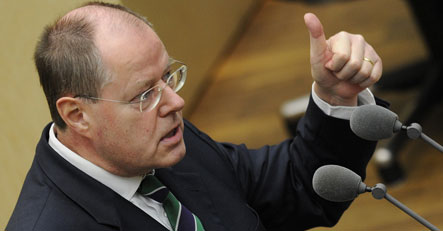 The plan cleared its final hurdle as the Bundesrat, the upper house of parliament representing Germany’s 16 states gave the green light, and came seven months before Chancellor Angela Merkel will stand for re-election.

Merkel’s fractious “grand coalition” cobbled together the €50-billion ($63-billion) package last month after its first €31-billion effort last year drew criticism at home and abroad for being too small.

“We are operating on the principle that Germany is strong and therefore can come to terms with this difficult economic situation,” Merkel said after the vote. “We will see to it that Germany emerges stronger from this crisis than it entered it. With the biggest package in the history of the federal republic of Germany, we are also living up to our international responsibilities.”

“If we approved all the applications that have been submitted unofficially, the €100 billion ould be insufficient,” an unnamed official told the newspaper.

An Economy Ministry spokeswoman declined to estimate the amount requested to date.

The raft of measures constitutes Germany’s largest postwar stimulus plan. It includes some €17 billion in infrastructure spending as well as about €18 billion in tax cuts for individuals and businesses.

Official data released this month showed that the German economy contracted by 2.1 percent in the final quarter of 2008, the biggest slump since East and West Germany unified in 1990.

The world’s biggest exporter, hobbled by weakening demand for its goods abroad and weak domestic consumer spending, entered recession in the third quarter of 2008 after two successive three-month periods of negative growth.

The stimulus plan forces Germany to take on about €37 billion in new public debt and Finance Minister Peer Steinbrück has acknowledged his country will next year break EU public deficit rules.

The package was approved by the Bundestag lower house last Friday. Merkel’s government has forecast the economy will shrink by 2.25 percent in 2009.