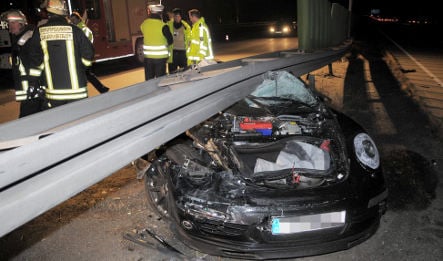 The 51-year-old driver was driving at high speed from Frankfurt to Heidelberg and crashed into a highway barrier for unknown reasons. He died at the scene of the accident.

A second test driver for the luxury sports car company was following the man in a four-door prototype and managed to slow down in time to avoid a pile-up, police said.

The A5 motorway in Hesse was closed going south while rescue workers cleaned up the accident, meanwhile the public prosecutor’s office called in an expert to assess the scene. Police estimated the damage to be in the tens of thousands of euros.

Another test driver for Daimler made national headlines in 2003 when he was involved in an accident that left a young mother and her toddler dead near Karlsruhe. He was sentenced to 18 months in prison for negligent manslaughter after witnesses said he’d been driving too fast and too close to the woman’s car when she lost control and hit a guardrail and a tree.

ROADS
Who are the worst drivers in Europe?
Url copied to clipboard!