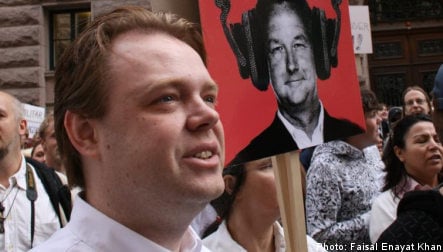 The world has changed. Technical developments allow all of us to collect, store and share digitized information on an unimagined scale. The cost of storage, bandwidth and processing power is, for business purposes, essentially zero.

So the world has changed, and will continue to change. But it can change in two entirely different directions, depending on who lays claim to this fantastic tool.

On the one side, there is the public. Every human with access to the Internet has received fingertip round-the-clock access to all of humanity’s collective knowledge and culture. This is a fantastic leap ahead for mankind – much larger than when public libraries arrived 160 years ago, and comparable to how society changed with the arrival of the printing press.

On the other side, there are the current people in power, who would like to harness this power to build a surveillance machine – collecting information about regular Joes, and actively preventing the free exchange of ideas – that would make George Orwell look like a cheery, skipping optimist. Many powerful institutions are pulling in this direction.

The trial against the operators of The Pirate Bay, which starts next Monday, offers a glimpse into these two possible futures going head to head with each other. The trial is not about copyright infringement, it is about the power over knowledge and culture as such.

Behold, for instance, the prosecutor’s list of witnesses. Usually, you would expect a witness to have some sort of firsthand observation of the action being on trial. Here, it’s bigwigs from across the media industry. Managers of institutions. It’s not the operators as individuals that are on trial, it’s what the establishment regards as a threat to their society – the pervasive youth culture of freely exchanging culture and knowledge.

Consider, for instance, what one of the witnesses said in an interview recently. Rasmus Ramstad, CEO of Svensk Filmindustri, stated that all Internet providers that allow (!) access to sites like (!) The Pirate Bay should be shut down. This amounts to abolishing the postal secret, and requiring the Internet as a concept to be closed down.

What scares the establishment is that everybody are equals on the net. Everybody can share and receive freely. There is no central point of control. They are fighting tooth and nail to bring back the good old days, where there was a hard division into approved senders and passive consumer receivers, where the approved senders would compete for the wallet of the consumers. Essentially, they are trying to turn the Internet into a cable TV network.

At the same time, Big Brother is enacting new laws to store how we move through town in our daily lives for a year.

I’m hoping and working for the Utopian alternative to the two above. But it’s going to take a lot of political change. Politicians don’t understand what is at stake, and appear uninterested in anything other than progressing the Big Brother dystopia. The only recourse at present is to have them replaced.

In its ruling the Stockholm district court awarded Sweden the domain names piratebay.se and thepiratebay.se.

The case marked the first time a Swedish prosecutor had asked for a web address to be wiped off the face of the internet, Dagens Nyheter reports.

“A domain name assists a website. If the site is used for criminal purposes the domain name is a criminal instrument,” prosecutor Fredrik Ingblad told the Swedish daily earlier this year.

The court agreed that the foundation had not done anything wrong and conceded that it could not force the group to block certain domain names, Dagens Nyheter reports. But by awarding the addresses to the Swedish state the court effectively ensured that they will not be sold on to another owner.

The file-sharing service was temporarily knocked off line in December after police seized servers hosted at a data centre in a nuclear-proof bunker deep in a mountain outside Stockholm.

But seven weeks later the resilient file-sharing behemoth was back on its feet and Tuesday’s ruling is unlikely to knock it off balance for long, as the court cannot prevent The Pirate Bay from continuing to run sites on other domains.

The Pirate Bay, which grew into an international phenomenon after it was founded in Sweden in 2003, allows users to dodge copyright fees and share music, film and other files using bit torrent technology, or peer-to-peer links offered on the site – resulting in huge losses for music and movie makers.

In 2009 four Swedes connected with The Pirate Bay were found guilty of being accessories to copyright infringement by a Swedish court.

They were each give one-year jail terms and ordered to pay 30 million kronor ($3.6 million) in compensation.