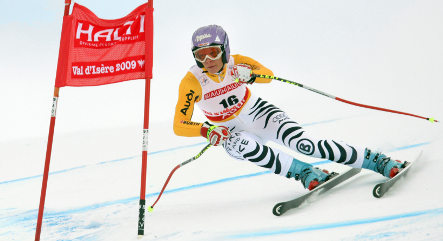 German women’s speed coach Mathias Berthold said Riesch had brusing to the face and spine, and most likely damage to the anterior ligament of her left knee.

Slalom specialist Riesch, who was due to take part in the super-combined in Val d’isere on Friday, returned to her hotel on foot before being driven to hospital for further tests after an initial examination by German team doctor Wolfgang Vogt.

“We don’t know exactly what the consequences of her fall will be for her carrying on in competition,” said Berthold. “But I think there won’t be any problem with her taking part. A great champion must show character in these cases and know how to overcome this type of problem.”

Back on the slope, Swiss teenager Lara Gut clocked 1min 30.41sec over the 2,135-metre-long Rhone Alpes piste, which has a vertical drop of 691 metres. Briton Chemmy Alcott was initially given a time 0.20sec faster but was later disqualified.

All downhill racers must race at least one of the three training runs to be eligible for either the super-combined, on Friday, or Saturday’s downhill.

American Lindsey Vonn, a big favourite for the speed event especially after picking up the Super-G crown, ranked 39th out of 60 runners with a time of 1:37.71, 7.3sec off Gut’s time.

Experienced Swede Anja Paerson, who will be seeking to bounce back from her disappointment at crashing out of the Super-G, posted 1:32.81 for a 19th place. The second training run takes place on Thursday and the third and final on Saturday.