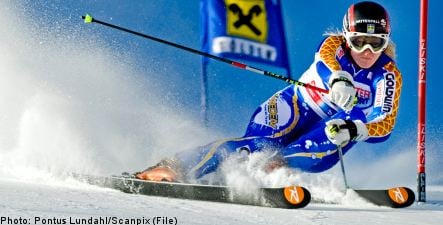 The 24-year-old Swede, who hails from the Stockholm suburb of Huddinge, finished with a time of 1 minute, 25.13 seconds, putting her 0.81 seconds ahead of Austria’s Anna Fenninger and 0.87 seconds faster than Andrea Dettling of Switzerland.

Prior to Monday, the 24-year-old Lindell-Vikarby had only once managed to climb on to a World Cup podium since joining the tour in 2003, having finished third in a Super-G in Lake Louise in December 2007 and her best to date this season had been a fifth place on the same piste again in a Super-G.

“What happened today is a dream,” said Lindell-Vikarby. “I was a bit nervous because I had to wait for the best skiers to go down.

“But I was the best today. Cortina is one of my favourites slopes. Mentally and physically I felt great and I was ready for a podium. I think I had a good run from top to bottom without any major mistakes.”

Meanwhile, a run by teammate Anja Pärson looked promising at the start until the former World Cup and Olympic champion crashed out following an attempted right turn, ramming into the safety net at high speed.

Pärson, who injured her knee at the weekend, was up shortly after the spill, however and made her way down the slope under her own power.