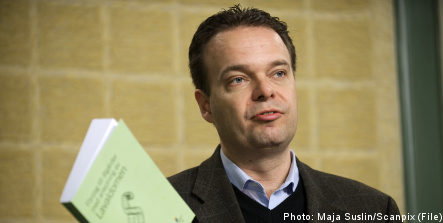 Littorin told journalists waiting outside the chamber that he “just got so damn angry”.

“I’m here to be questioned about my work, not to take all sorts of crap from individual members.”

The minister stepped aside for a moment to allow himself time to calm down before speaking further to reporters. He then went on to explain that his fury had been bubbling under the surface for quite some time.

“If you read the minutes and Astudillo’s blog you will see that I am often referred to as a son of a bitch [fähund]. There has to be a limit to it. Every single time, there is some form of attack. It’s unpleasant to reduce matters to this level,” said Littorin.

Astudillo expressed surprise that the minister had left the chamber in the middle of a debate about unemployment insurance rules for commuters in the Öresund region.

“Of all the ministers, Littorin is perhaps the most bombastic. He likes debating and exaggerating. But clearly he doesn’t like it coming back at him. I think it’s a pity he left the debate,” said Astudillo.

The Social Democrat MP has dismissed claims that he his running a campaign against Littorin on his blog, despite repeated references to the minister. In one blog entry, Astudillo compares Littorin to his daughter.

“Littorin is becoming more and more reminiscent of my daughter when she is tired. She gets extra grouchy and defiant when she doesn’t get what she wants. But she’s six years old. Has the government, in Littorin, got itself an annoying little kid with a case of the terrible twos?”