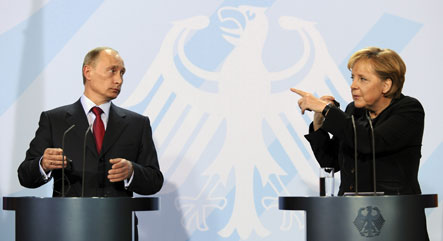 “I spoke today with these companies, and I think there is a way, together with the companies (Russian) Gazprom and (Ukrainian) Naftogaz, to start a test phase,” to resume gas imports to Europe via Ukraine, Merkel said.

This would be a “regime in which gas supplies to western Europe and the Balkans will be made possible again, and at the same time ensure that gas that Gazprom intends for Europe does not somehow disappear in Ukraine,” she told a joint news conference with Putin in Berlin.

Merkel said the test, helped by European Union observers already in place in Russia as well as Ukraine, should be “implemented quickly.”

“I call for this way towards a test phase to be tried because time is pressing,” Merkel said. “I hope that with this way now, we can move towards a regime in which Europe again receives its gas. I am very pleased that companies in Germany are also showing their readiness, … along with Gaz de France [GDF Suez], ENI and Gazprom, to find a feasible solution.”

Putin, for his part, said: “There are details which should be worked out at the corporate level. I think it can be done.”

He added it would be “right and sensible” to create a group of international experts to check “the technical state of the gas transit system of Ukraine and determine the most optimal routes for our gas exports and ensure us and our consumers against unending theft.”

ENI’s chief executive Paolo Scaroni said before the get-together in a plush Berlin hotel the firms would put together a specific proposal “within the next few hours.”

The purpose of the consortium, say Russian officials, is to resolve the fraught issue of so-called “technical gas” – gas that is not delivered to consumers but is used to maintain pipeline pressure and keep supplies flowing.