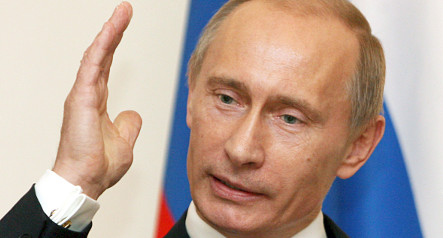 Putin was to mix business and pleasure during his two-day trip. First, a crunch meeting with Chancellor Angela Merkel, who has questioned Russia’s credibility over the gas crisis that has almost halved Germany’s own reserves.

Then the prime minister will be going to the black-tie debutantes’ ball in his own KGB haunt in Dresden – one of the hottest events on German high-society’s social calendar.

The trip is set to be dominated, however, by the ongoing row between Moscow and Kiev over gas which has left many eastern European countries without heating in the depths of one of the coldest winters in recent years.

Just hours before Putin’s plane touched down in Berlin, a spokesman for Merkel said both Russia and Ukraine were to blame for the dispute. “Neither side is meeting its commitments,” government spokesman Thomas Steg told a regular news conference, calling on both sides “to deal with the situation in a constructive manner.”

Steg called it “completely unacceptable in the 21st century” that the spat had left millions of people in Europe without heating, and called on Moscow and Kiev to come to a long-term agreement to ensure reliable supplies.

In her talks with Putin later on Friday, Merkel would make clear – as she did in phone calls on Thursday with Ukrainian President Viktor Yushchenko and Prime Minister Yulia Tymoshenko – that the “loss of reputation” on both sides was “grave,” Steg said.

The chancellor – who grew up in eastern Germany and speaks fluent Russian – has said she would address this credibility issue during her meeting with Putin, who in turn speaks fluent German.

Frantic international efforts to end the crisis were ongoing, with Ukraine preparing to host an energy summit later Friday ahead of a showdown meeting in Moscow on Saturday between Russia, Ukraine and the European Union. The situation is becoming increasingly pressing for Berlin, with its reserves dropping to 59 percent, according to the Financial Times Deutschland on Friday. If no solution is found, reserves could soon drop below 50 percent.

Trade between the two countries is very much a two-way street, however, with over 4,500 German firms holding subsidiaries in Russia and every fourth machine imported by Russia “Made in Germany.”

A Russian government spokesman told AFP Thursday that the two leaders would also discuss the Nord Stream pipeline project, led by state-run energy giant Gazprom, which Moscow has touted as an alternative to exports through Ukraine. With the heavy diplomatic negotiations over, Putin is expected to put on his bow-tie and set off for the ball, joining 2,000 tuxedo-clad guests at the sumptuous Semper Opera House in Dresden.

Putin will be on familiar territory. Dresden was his first and only foreign posting as a KGB officer where he worked between 1985 and 1990.

Later recalling his time in Dresden, Putin has admitted he gained around a dozen kilos (26 pounds) as he acquired a taste for German beer. He said he drank around 3.8 litres (seven pints) a week.

Dresden was also the location for one of the most tense moments of Putin’s career. As the Berlin Wall crumbled in 1989, the KGB officers in Dresden found themselves fending off an angry mob.

“The threat was serious. And we had the documents. Nobody moved to defend us,” Putin later recalled. “I personally burnt a huge amount of materials. We burnt so much that a furnace exploded.”

However, it appears the city of Dresden is no longer so angry with him. At the ball, Putin will receive the “Order of Saxon Gratitude” which is awarded to “exceptionally determined people who have courageously worked for the present and the future of both Saxony and Germany.”